Last year I spent a few weeks bouldering in Varazze, and put together a short movie of some of the highlights.

I’m still a very amateur videogrpaher, but putting these together is a fun rest day activity on a climbing trip. Any comments, let me know. 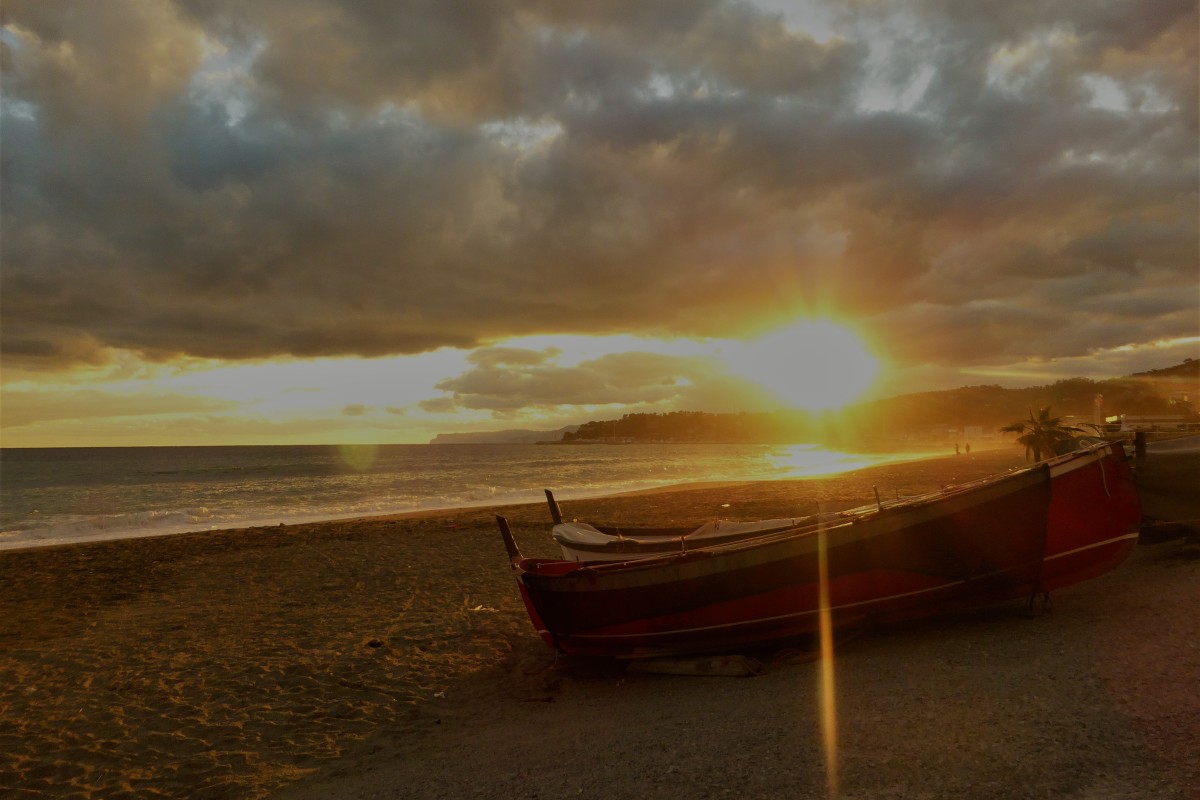 I set off on this year long climbing trip with a warning ringing in my ears. “Be really careful if you try anything over 8000 metres” Err… okay, that’s fairly easy advice to follow for someone who is primarily a boulderer! I arrived in Varazze after ten weeks on the road, obstinately on a climbing trip, and I’d not been over 8000 millimetres yet!

Dope on a Rope

This exclusivity had to change at some point though. I set off on this trip with some grand designs on doing some multi-pitch along the way, maybe even a big wall in Yosemite. And as much fun as bouldering is, it certainly is not training for a big wall! I had to get on a rope.

I’ve been climbing for years now. I started when I was about 25 I think, mostly doing trad on the Aberdeen sea cliffs. I transitioned to sport climbing at some point when I decided that trad was too scary, and eventually chickened out of that too to become (mostly) a boulderer. My ‘head games’ have never been anything to write home about. The last few years though I’ve been mostly a quivering wreak on a rope, with a few brief interludes of passable climbing. Getting to Finale was finally an opportunity to blow away the cobwebs, dust off the ropes, and get my head games in order for some ‘real’ climbing…

But before I manned up and got to that, of course I treated myself to some bouldering in Varazze. For two weeks…. 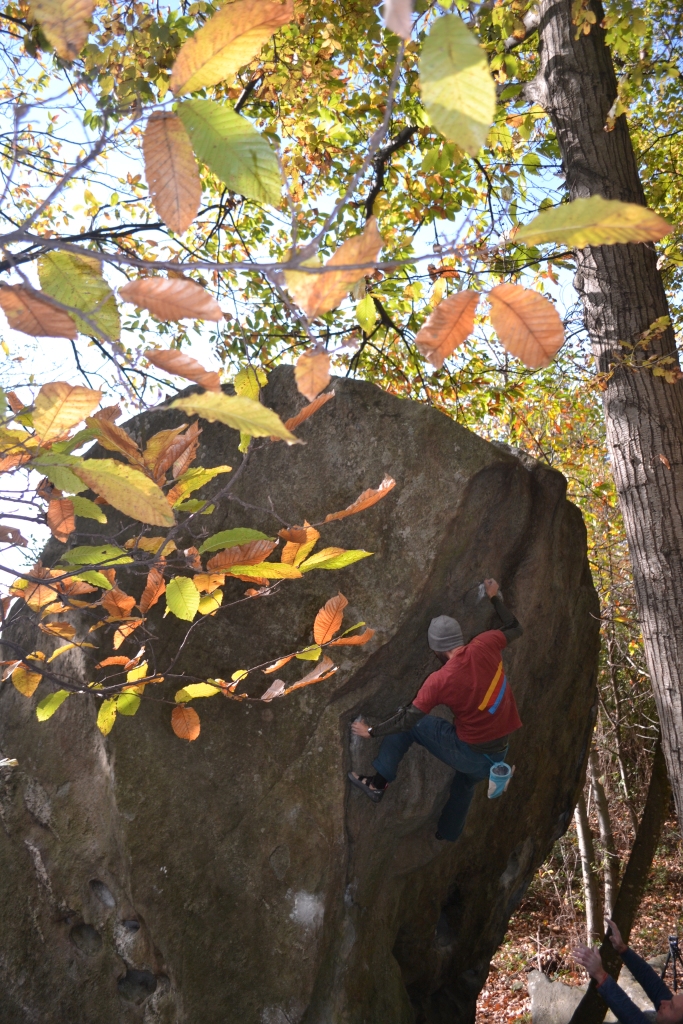 Varazze is a fairly typical Italian seaside resort. Hotels and restaurants line the shore alongside touristy shops and cafes. I would guess that the place would buzz in the middle of summer, but showing up in November is a different story! Aside from one holiday weekend, the camp site was very quiet – we were the only people there at times. The restaurants were similarly empty, and the bouldering was pretty quiet too.

Varazze’s most famous son is ‘Gioia‘ (8c+ / V16), Christian Core’s 2008 contender for worlds hardest problem (at the time). I guess the existence of this problem is probably the only reason that we had heard of the place, although of course it is way too hard for me to try.

A point to note: The Varazze bouldering guide is out of print, and is not available in any of the local shops. There does seem to be copies available on Amazon though, so a bit of forward planning could help out. If like us, you show up clueless and guideless, there is a cafe up the hill called Trattoria ai Cacciatori that has a copy of the guidebook. They are happy for you to snap photos of the pages on the assumption that you buy a coffee. The coffee is €1.00 so no excuses !

The bouldering in Varazze is… okay. It’s a good destination, but probably not a world class venue. The guide is an inch thick and there seems to be 10 problems up every sliver of rock. I guess I was a bit spoiled arriving there after bouldering in Chironico and Fontainebleau prior. Some of it is very good, but there is a lot of digging to do to find the gold.

We did find gold though. In particular, there are some cool problems at ‘La Cava‘. The Mu/Muu/Muuu traverse problems were fun, and the highball stuff on the back of the Equilibrium boulder is really good, even if it did elude me on this trip…

The main area – Potalla – has a lot of good stuff as well. Mike got ‘Cuicciati il Calzino’ for the hardest send of the trip so far at 7b+/V8, and Keith and I ‘made do’ with a number of V6 and V7 problems. There is loads of cool stuff all the way around the ‘Adams Sleep’ boulder. ‘Mr. Ciabatta’ (6c+/V5) and ‘Adams Sleep’ (7b/V8) itself probably the highlights, with a mention also for the crack traverse ‘Nebulosa’ (7b/V8).

I think if you are in the area is is definitely worth spending a few days bouldering at Varazze. The sport climbing at Finale Ligure is excellent, and splitting up a trip between Varazze and Finale will definitely make for a good time.

Roped up in Finale 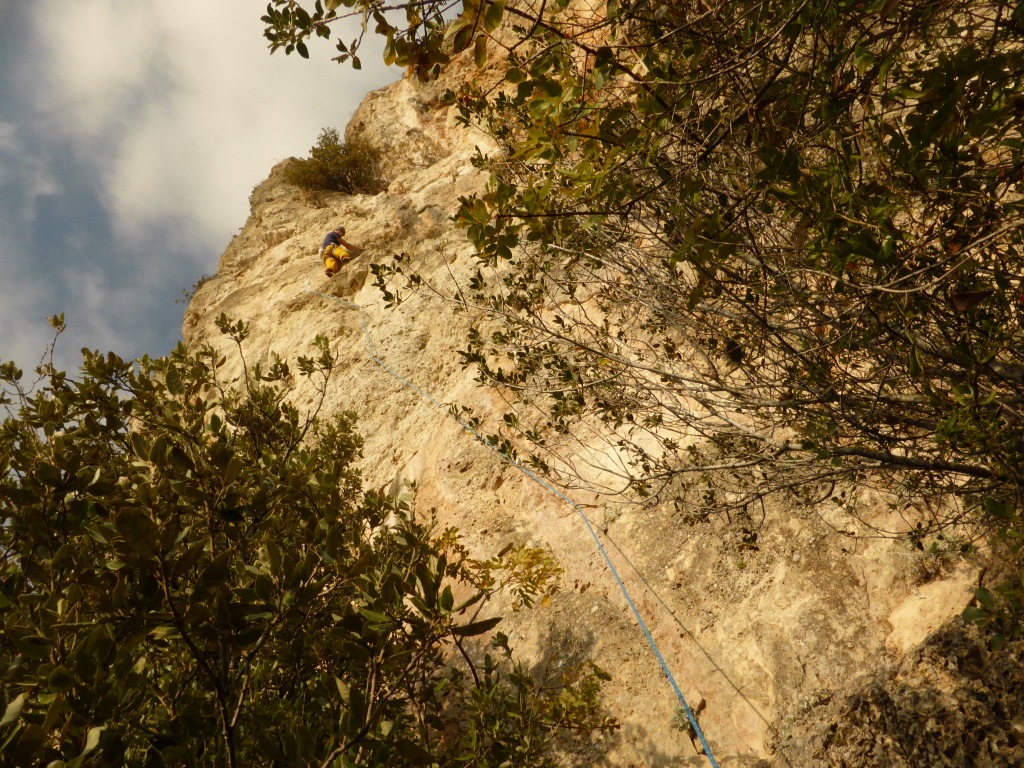 I’ve done a few routes over the last few years, but I’d guess I’ve been doing about 95% bouldering. Even on a good day, I don’t have a particularly good head for routes. So of course, the first thing I did in Finale was to get straight on a f7a/5.11d sport route. And of course, I got totally shut down. Coming off the back of months of bouldering, I could do the moves okay using a clip stick to go bolt to bolt, but actually leading the route was a different story. Moving above the bolts I was a quivering wreak and climbing like a brick. And worse, I continued to quiver no matter how much I dialled down through the grades… Clearly there was a lot of work to do.

When it comes to physical training, I tend to disdain the fingerboard, preferring to just go climbing and get strong slowly (or not at all…). I take a similar approach to training the mental side of the sport. Even though I know that fall practice is a short cut to performance, I tent to just shake and wobble my way up a load of low grade routes until some semblance of competence and confidence emerges. I’d like to say that I did the sensible thing and took a bunch of falls early on, but that is not the case and I went for my tried and tested, if time consuming method.

I think I spent about ten days climbing in Finale in total, and I think the hardest route I got up was f6b/5.10d. My previous high point was f7b/5.12b, so not exactly at the top of my game! I did a little bit of fall practice, but not nearly enough to push through the head games issues and really make the most of the climbing…

Which is a shame, because the climbing in Finale is excellent. I can’t really say what the ‘typical’ style is because there is so so much rock there and we didn’t even try 1% of it. There is a lifetimes worth of routes. We were mostly on juggy and steep short pitches, although we did try out a few slabby problems as well. There are massive bolted multi-pitch climbs at relatively low grades, as well as short and pumpy coastal crags. The setting is hard to beat, climbing on crags overlooking the sea and watching the sun set on the walk out is not a hardship, regardless of how the actual climbing is going.

I’d be lying if I said I really ‘enjoyed’ the climbing at Finale in the moment of actually doing it. It was torture! Or maybe ‘type 2 fun’ – fun only when I was safely back on dry land. But, there was something there. I used to love sport climbing, and only in my dotage (my thirties) had I really lost my bottle and switched to almost exclusively bouldering. The perfect limestone overlooking the sea in Finale did serve to relight the fires and remind me why I got into this sport in the first place.

The green shoots of progress were finally starting to break through when winter caught up with us and chased us further south again.

The bouldering in Varazze was excellent. I really think I consolidated the improvements made over the prior few months in Font and Switzerland. The venue itself disappointed at first but came good with a little bit of exploration, and ended up being a really worthwhile place to spend a few weeks.

In terms of climbing performance, Finale Ligure did not go well. But in terms of rekindling my enjoyment of getting roped up it had done the job. As much as I love going bouldering, there is definitely something missing if it’s not complimented by roping up and going climbing, and it was great to get back into it.

And of course, the climbing trip was just getting started. There was and still is plenty more to come!

This is a text widget, which allows you to add text or HTML to your sidebar. You can use them to display text, links, images, HTML, or a combination of these. Edit them in the Widget section of the Customizer.