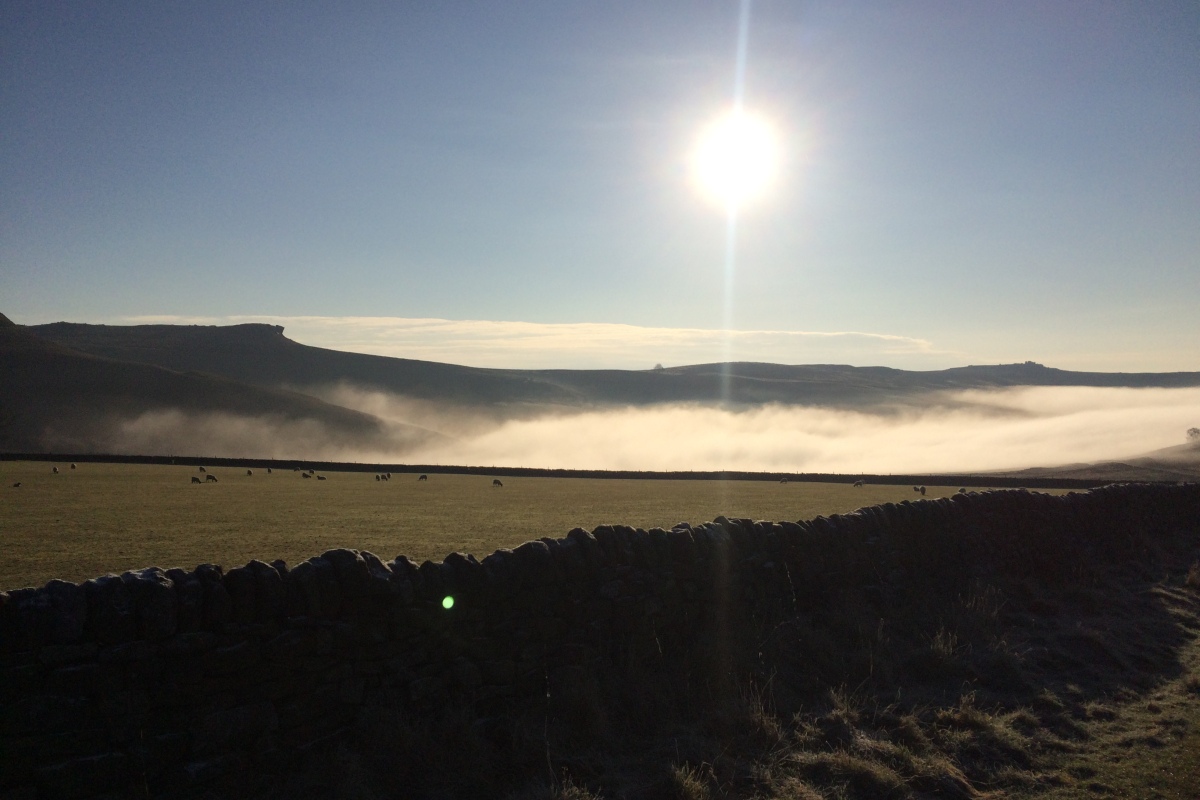 The US trip inches ever closer. Got my tourist visa approved last week in London, as soon as the visa arrives, I’ll be on the first available flight!

Getting from Aberdeen to London for a visa interview should really just involve a straightforward and cheap flight down and back. However, doing it that way doesn’t really end with any climbing getting done. So, I decided instead to drive to the Peak District (more than half way) and get the train to London from Sheffield. This meant that I got four days climbing around England on the way there and back for the visa.  Which seemed like a win versus flying down and being stuck climbing in the usual places in Aberdeen.

I had initially planned to climb in Northumberland on day one, but I didn’t really have the weather, so I stopped in Glasgow and went to TCA instead. Decent forecast in the Peak the next day so I got on with the drive in the evening and got set up in North Lees campsite. My mission in the Peak was to get Breakfast. By which I mean ‘Breakfast Arete’ at Burbage West, and also to get a breakfast roll from the bakery in Hathersage. I’m not sure really if it’s good climbing fuel to eat a multi-thousand calorie fried breakfast in a bun, but I am sure that I don’t care either way. It’s the best bit of a Peak District climbing trip.

Breakfast Arete at Burbage is a Peak District classic, and another problem that I had tried and failed on before. I seemed to remember being ‘close’ the last time I was there, so I went in once again with an inflated sense of confidence and ego. The first few moves with the heel-toe cam came together fairly quickly, but the subsequent ‘hold the barn door’ certainly did not…

I think I spent four hours or so falling off a bit of rock that is no more than four metres high. And, the move that I was falling off I could reach from a standing start. So I was basically starting seated, pulling up to a stand, and then falling on my arse. Rinse and repeat… Anyone watching who didn’t know what bouldering was all about would have thought that I was off my head. To be honest, I was starting to wonder the same thing myself. I was getting to the stage of just lashing it when the rain came in and forced me to retreat defeated, sore, and fingertipless.

I don’t think that ‘I went climbing’ is a good reason to miss a meeting at the US embassy. I doubt they appreciate the importance of sending the project, so I got moving again and got the train down south. I guess I probably should have taken a look round the capital while I was there, but I’ve seen it before and I’ll be there again in the future. So I dealt with the visa admin in the morning and then raced back to Burbage instead for another go! Again, I’m sure that this is a sign of some kind of madness, but I don’t care – there was a project waiting for me, and so I had to go.

Conditions at Burbage had been excellent prior to the previous days rain, but were now much less favourable. A cloud had descended so humidity was about 100%, and there was still puddles and seepage from the rain. Most of the crag was unclimbable, but Breakfast was more or less dry apart from the top out… Undeterred, I picked up where I’d left off the day before and got straight back into the sit / stand / fall cycle.

Perseverance to the point of probably insanity does sometimes have it’s rewards though. After a couple of more skin abusing hours, and a bit of beta refinement, I was surprised to find myself finally not falling off. After so many failed attempts at even getting established, it was fairly shocking to find myself clamped onto the arete with the toe on the crucial hold. One big pop move and then an easy top out, and it was all over. Success on day two in poor conditions and fading light. Delighted!

Since I am now a blogger (……) I though I’d better film the effort for your viewing pleasure. As you can see from the terrible footage, I am not much of a videographer yet. Hopefully I can get some better vids done in the states. Regardless, here it is in all it’s glory:

The final days climbing was planned for the Lake District on the way back up north. Unfortunately, the weather didn’t really play ball, and I was limited to a couple of hours playing on some boulders near Carrock Fell. The Lakes is somewhere I’d like to get back to, but it’ll not be till after the US trip now. A bit of a shame, but I’m still calling the mission a success overall. Got my visa, ticked Breakfast, and got two of Hathersage’ most heart attack inducing breakfast rolls down me. All good!

This is a text widget, which allows you to add text or HTML to your sidebar. You can use them to display text, links, images, HTML, or a combination of these. Edit them in the Widget section of the Customizer.